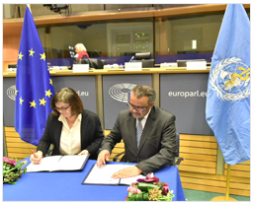 Cooperation between the Commission and WHO, in the fields of antimicrobial resistance, strengthening health systems and preparedness for outbreaks of communicable diseases in developing countries, demonstrated renewed commitment and cooperation for the Global Action Plan for Healthy Lives and Well-Being for All. The initiative aims at accelerating progress towards achieving the Sustainable Development Goals and will be presented at the United Nations General Assembly in September 2019.

During his visit to the European Parliament, which was commemorating the 70th anniversary of the Universal Declaration of Human Rights, Dr Tedros highlighted, “Both WHO’s Constitution and the Universal Declaration of Human Rights assert that health is a human right, rather than a privilege for those who can afford it. But we must remember that the right to health is not a given. It takes renewed political commitment and leadership in every generation – including ours”.

In thanking official members for their commitment to the right to health, he emphasised the key role the EU has “in ensuring health remains a priority for the EU in the coming years. In the current debate about the financial framework for the next 7 years.”