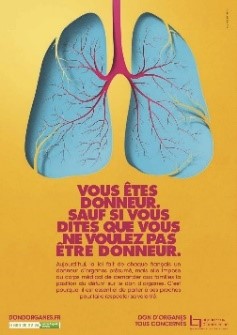 While the system for organ donation in France is based on presumed consent, new rules which entered into force as of the 1st of January 2017 amend the 1976 legislation on organ donation and set an online national refusal register allowing citizens to opt out by registering during their lifetime their refusal to become an organ donor after death.

The legislative review aims to better take into account the position of the deceased and not the wishes of the family.

When individuals do not wish to be a donor for all organs or would like to donate specific organs, they can write a signed note accordingly to be passed on to the family who will share it to the medical team after death.

In the meantime, the French national body responsible for organ donation Agence de la Biomédecine has launched an awareness raising campaign in the country on the national rules for organ donation, developed through a series of YouTube videos, TV public service advertisements and posters displayed in hospitals and healthcare settings.