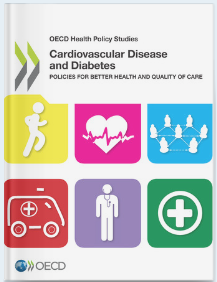 19 June 2015
OECD Health Policy Studies, 17 June, 2015
Fewer people are dying from stroke and heart attacks than before, but rising levels of obesity and diabetes, particularly among younger people, are going to push mortality rates higher, according to a new OECD report. The report says that advances in the prevention and treatment of cardiovascular diseases have led to a 60 per cent drop in mortality rates over the past 50 years in the OECD.
But cardiovascular disease (CVD) remains the leading cause of death in OECD countries and obesity and diabetes rates are rising which means more people will be at risk of CVD: approximately 85 million people have diabetes in OECD countries, representing around 7% of people aged 20-79 years old. That number is projected to reach 108 million by 2030, a 27% increase, and meaning a further 23 million patients with higher health care needs and greater risk of complications. Obesity rates are also rising in most countries, affecting one in five people in the OECD. The likelihood of dying from a stroke or heart attack varies widely: from less than 200 per 100,000 people in Japan, France, Korea and Israel each year to over 500 in Central and Eastern Europe countries, including Slovak Republic, Hungary, Estonia and Czech Republic. Many countries are still a long way from making the necessary reforms in their health systems to deliver the necessary quality of care needed to improve CVD outcomes.
Among the report’s recommendations are that countries should: