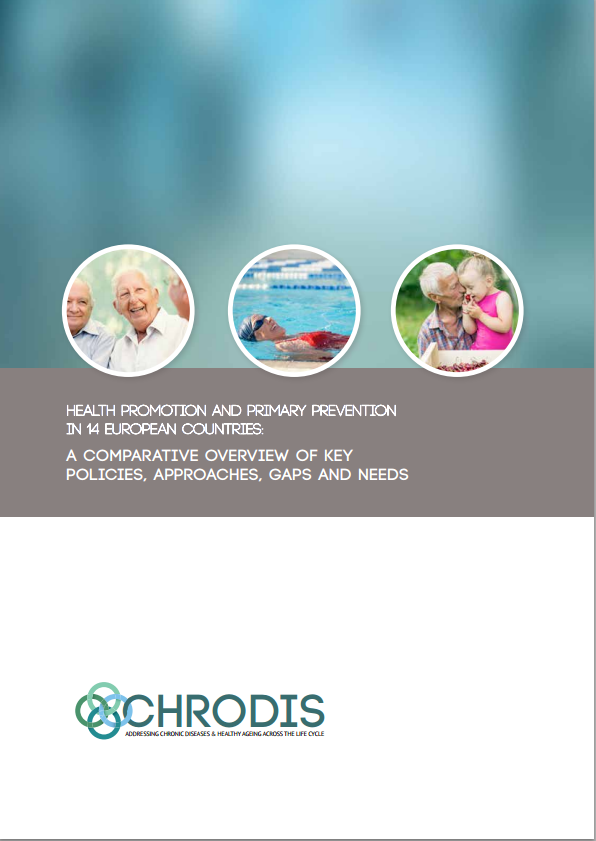 Chrodis Report on Health Promotion and Prevention in 14 Countries

While much has been done in terms of health promotion and primary prevention of chronic diseases across Europe, there are still gaps and needs that require urgent attention. This is reflected in a new report that provides a comparative overview of key policies and approaches used to promote health and prevent chronic diseases across 14 European countries, which has been published by the Joint Action on Addressing Chronic Diseases and Healthy Ageing across the Life Cycle (JA-CHRODIS).
The overview report shows that, while there are significant differences in health systems and structures across European countries, there are also similarities in terms of the gaps and needs identified in the area of health promotion and primary prevention.
The outcomes of the report, which was coordinated by EuroHealthNet in collaboration with the German Federal Centre for Health Education (BZgA) and on behalf of JA-CHRODIS, will be discussed by policy makers and stakeholders across Europe at the upcoming JA-CHRODIS Conference on “Joining Forces in Health Promotion to Tackle the Burden of Chronic Diseases in Europe”, that will take place later this year in Vilnius, Lithuania.
The most frequently identified gaps and needs relate to capacities and capacity development, evaluation, monitoring and research. The 14 countries report comparatively low, stagnant, insufficient or falling proportions of national expenditures on health promotion.  On average, European countries spend 97% of health care budgets on treatment and only 3% on prevention, although health promotion and primary prevention measures provide value for money and increase the cost effectiveness of healthcare spending.
A recent WHO Europe report summarises the latest evidence outlining the short and long term returns of investments of interventions on e.g.  physical activity, mental health and healthy employment. Despite such evidence, European countries are still not addressing the “urgent need” as stated in the conclusions of the EU Reflection Process on Chronic Diseases, “to invest in prevention to help avoid paying for healthcare in the future.”
Caroline Costongs, Managing Director of EuroHealthNet states that: “Despite persistently low levels of investment in health promotion and prevention, there is growing interest in the issue of how to remain healthy. As this report reveals, European countries have much to learn from each other, and can help one another strengthen their policies and measures, also in relevant areas like e-health and m-health.  It is, however, crucial to collectively explore the ethical dimension of health improvement, given the market interest in this area, to ensure that innovations are effective across the population and do not unintendedly widen health inequalities.”
According to Ingrid Stegeman, Health Promotion Europe Manager at EuroHealthNet, “Policy makers pay lip service to the role that health promotion and primary prevention can play in reducing the burden of chronic diseases, lengthening healthy life years and increasing well-being.  Yet they are still not investing in this. This has to happen if they are really serious about reducing the burden of chronic diseases in Europe.”